Boy George began his DJ’ing career when he was just 17 years old, playing to a crowd of trendy Londoners at Planet’s nightclub alongside pal, and then housemate, Jeremy Healy.  This of course, was one of George’s many jobs of this time period and one of his other jobs of the moment suddenly became a little more time consuming – Culture Club!  With the birth and success of C.C the DJ’ing had to go on the back burner for quite sometime whilst George went off and sold a fair few million records around the globe.  George has though, never lost his passion or touch for DJ’ing, nowadays mentioning in numerous salubrious press interviews that DJ’ing is a real love for him and he enjoys it much more sometimes than playing to a stadium audience of thousands.

George’s time behind the decks was resurrected back in the day! Kicking off in Nottingham’s legendary Venus Club, where promoter James Ballie trusted George to run a More Protein night in one of the rooms (named after George’s successful dance label). George turned up with his motley crew of Jeremy Healy, M.C Kinky and Amos, together with his collection of 7” singles in carrier bags and a broken box… the rest, as they say, is history!

George got the DJ’ing bug again and offers came flooding in from far and wide.  At first, people said, as expected, that booking Boy George was just a novelty factor, saying he would be off to pastures new once the newness of it all wore off.  This didn’t last for long though and soon clubs were indeed booking Boy George on the back of the fact that he could hold his own.  He could also mix a mean set and fill a club with up for it, upfront punters and not star struck fans dressed in frilly shirts and dreadlocks who may be classed as stuck in the 80’s.

Regular appearances at clubs like Progress, Cream, Gatecrasher, The Manor, Sugarshack, Colours and God’s Kitchen certainly helped put George’s DJ’ing career into full flourish mode. Really he has never looked back since and is now as established in DJ land as the next man!

Spin off’s from his DJ gigs have been the wonderfully successful series of mix CD’s ‘Dance Nation’ and ‘The Annual’ both through Ministry of Sound Recordings and both selling thousands of units per issue.  Following these, a series of albums were released entitled ‘The Galaxy Weekender’, the first of which was a collaboration between George and Allister Whitehead.  These albums, also released via Ministry, were there to tie up the link between George as a DJ on Galaxy FM where he then held a weekly show.  These compilations were also huge sellers and the radio show was gaining support not just on Galaxy but on other station’s world-wide due to a syndication deal –the show was called Clubversive.  Unfortunately, 2002 saw the demise of Wise Buddah’s broadcasting arm and with it went George’s show.

George’s DJ’ing gigs have taken him from Austria to Australia, Bolton to Bulgaria and even onto the catwalks of the fashion hierarchy world-wide. George makes the music for the shows and DJ’s at the post show glamorous parties for names such as Versace and Phillip Treacy.

Over the past few years George has successfully written and put onto the West End stage, the musical ‘Taboo’ – a huge hit. Taboo is a happy, sad, heart-wrenching, hysterical view of the 80’s scene and features characters such as Steve Strange, Philip Sallon, Marilyn, the iconic Leigh Bowery and indeed a young George himself.  George played the part of Leigh Bowery and followed on from the hilarious, Matt Lucas (aka George Doors of Shooting Stars fame). George received brilliant press. He enjoyed his acting so much he continued the run, amongst his other business until it finally closed it’s doors early in 2003.

Over the years (as long as we can remember) George has spent a huge chunk of the summer season holed up in a villa in Ibiza working for Balearic front runners Tonic, UFO and Sundance,  as well as playing for the likes of Cream, GK, Manumission and regular spots at Mambo. George gave Ibiza a miss in 2002 due to ‘astrological differences’. George is a keen believer in ancient Japanese Astrology, Feng Shui & 9-Ki and also follows a staunch macro-biotic diet all of which are dealt with in George’s life by close friend Dragana Browne and husband, Feng Shui guru Simon Browne, between them a wealth of knowledge.!  Ibiza has become a home in the summer and he has a real affection for the place, so much so that last year he purchased some property there, something that was long overdue.

Aside from the clubs, more on the musical tip, we have seen co-writes, production and much, much more.  There has been 2 compilation vinyl (well CD actually!) outings.  The first was his Essential Mix album in the U.S, released through London/Sire/Warners. George toured the U.S. to coincide with the release and enjoyed it immensely.  The second album, and more recent, was the ‘BoyGeorgeDJ.com’ album released on Trust The DJ imprint of Sony. Both were successful ventures and there will be more to follow. Musically, the man is today on top form and is managing to co-write some amazing songs with people such as Faithless, Hi-Gate, Dark Globe, Amanda Ghost, Sash, Deep Dish, Rui Da Silva, Avenue D and Eddie Lock.  Also there was a released dance album of past CC stuff with some really credible and outstanding mixes from high profile production outfits.

Not satisfied with the above, somehow, George has still managed to successfully run his cult label More Protein which has also spawned imprints of it’s own. The label was once a part of the Virgin Records group but George also managed to turn his hand to a bit of remixing of late and has spawned a fair few beauties – Missy Elliot, Liberty X, EMF to name but three.  One of the most exciting things the label has been involved in for a while has to be The Twin. A project of George collaborating with others (see separate press release) and taking the whole thing also into the live arena.  George has already performed The Twin live at Nag, Nag, Nag , The Electric Ballroom and The Cock here in the UK and also at Plaid in NYC to name but a few. All have received great reviews.  The Twin alterego will be seen on forthcoming world-wide dates where George will be doing a short live p.a, the first time in years as well as of course DJ’ing.

George has already written a best selling book, his autobiography aptly titled ‘Take it Like a Man’ and he writes a weekly column for The Sunday Express where he has a chance to reflect over his previous weeks antics.  Still in writing mode, he released another book, this time taking in his passion for healthy-living cookery.  Entitled ‘The Karma Cookbook’ and co-written by aforementioned friend and macro-biotic genius chef Dragana Brown this looks set to be another big seller!  Not satisfied of course there is a deadline looming on the follow up to the aforementioned ‘Take It Like A Man’. In George’s own words it picks up where the first one finishes and brings us up to date with this man’s extraordinary life. 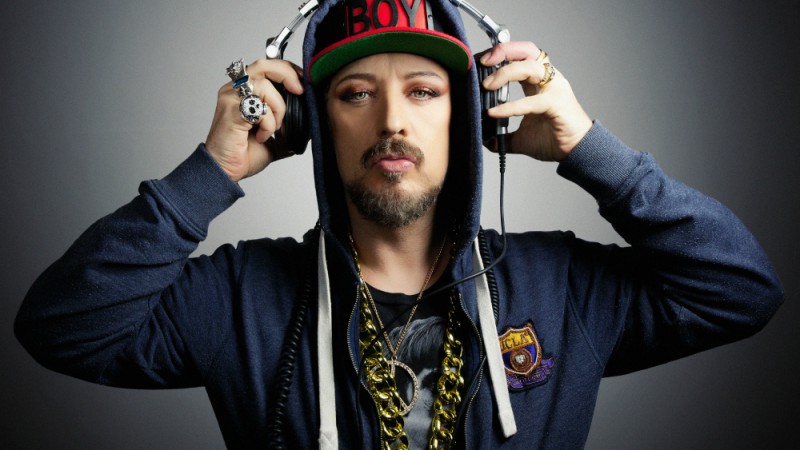